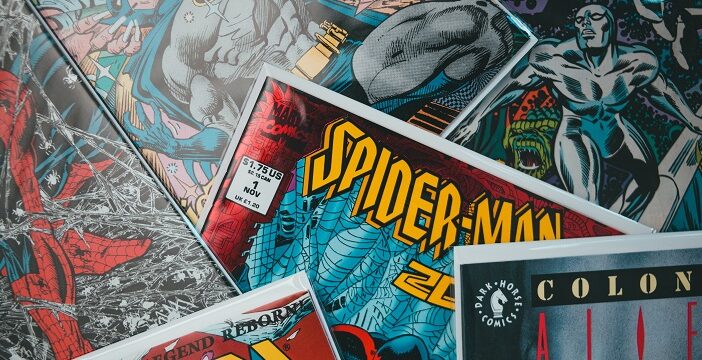 Last year, 2021, was one of renewed popularity for the translation of entertainment products: the global success of Netflix’s TV shows, for example, led to major demand for translators, and generated fierce debate on the quality of adaptations and translations.

The difficulty in translating this type of product is also and above all due to the peculiarity of the format; an audiovisual product is, indeed, a stratified work, a mixture of text and images linked intimately and inseparably.

The same thing undoubtedly applies to comic books! Just like a film, a comic book has a unique tone which depends on choices made in terms of direction, script, photography and editing: the word “comic book” evokes the image of a multi-faceted universe of stories with the widest-ranging styles.

How to prepare for translating a comic book

Comic books are not all the same, and it is advisable to be familiar with the different genres before taking on a translation.

These products range from Disney comics for children, such as Mickey Mouse and Monster Allergy, through the American comic books published by Marvel and DC, to bandes dessinées, a French term which is used to identify comic books in general, but abroad is used to refer to Franco-Belgian comics, such as the essential Blacksad.

Moving on to the Land of the Rising Sun, we find not only manga for children and teenagers such as Dragon Ball and Naruto, but also works aimed at more mature audiences, such as those of the maestro, Jiro Taniguchi.

Last but not least is Italy, a country with a long tradition in the genre of graphic novels and comic books for adults such as Diabolik, Dylan Dog, and more contemporary works by illustrator Zerocalcare.

The first obstacle we come up against is undoubtedly the space limits imposed by the speech bubbles, or balloons, which are used primarily as containers for the dialogue.

English has the advantage of being able to express thoughts and concepts in a concise manner, so translators working into English have a natural advantage, while translating from English into Italian, for example, will usually involve an expansion of the translated text compared to the original. Translators will therefore need to look for solutions to keep the length of the lines of dialogue more or less the same.

When faced with plays on words which are untranslatable, or cultural references which would not be understood by the reader, it is essential to maintain a basic level of consistency between the text and the drawings – particularly if the drawing contains an element closely linked to the wordplay – and therefore translate faithfully, yes, but to the spirit, or the communicative intent of the text, rather than to the letter.

What to do, though, if the character uses unusual slang or local dialect? How can we render that in the target language despite such differences being completely untranslatable?

Unfortunately it is not possible to give any general rules here, as this is the area where the translator must use all their skills and experience to the best effect. In writing A Clockwork Orange, Anthony Burgess famously invented an entirely new slang, or argot, for his characters, as he knew that any existing slang would not age well or be familiar to foreign readers.

But you don’t need to be a linguistic genius of Burgess’ calibre to achieve good results. There are many ways to represent different accents, nationalities, slangs etc. in writing, and of course being familiar with the genre will help no end by providing examples of how other writers and translators have dealt with these issues.

What’s more, the way that a speech bubble is drawn can give both the reader and the translator precious clues on the tone and deeper meaning of a work: a speech bubble with three dots indicates a character’s thoughts, a dotted outline means that they are whispering, and a jagged one means they are shouting.

Then there is the huge world of onomatopoeia, that is words which sound like their meaning.

The problem for the translator is that these can change from one language to another – Italian cockerels go chicchirichì rather than cock-a-doodle-doo.

However, comic book translations into other languages often retain English onomatopoeia, such as crack and gasp, but this can have as much to do with historical reasons as stylistic choices: in the past, for example, translators were not always able to modify the original strips, and so the graphics incorporating these words were left unchanged and so they entered the comic-book lexicon.

Another frequent trap comes from the use of boldface to emphasise certain words, although this is more common in American comics. The translator must be careful not to blindly retain the boldface for the same words, as this could lead to unwanted emphasis and tone.

Aside from boldface type, there is another way to emphasise dialogue or onomatopoeic sound effects, known as (display) lettering – part of the typesetting whereby the typeface, size, colour and spacing of the words can be varied for emphasis.

In light of all this, we can see that translating comic books is clearly a complex and tricky operation which can strike a very delicate chord in the mind of the reader.

This is because the original work is created in a language, and therefore within a culture, which represents a unique and unrepeatable vision of the world, which is often very different from the target one.

It is here that the comic-book translator comes into play, with their professional toolkit containing the experience and knowledge gleaned from a sound linguistic education, as well as obviously a passion for what they do: it is, indeed, impossible to translate comics without knowledge of their specific language and style, and the challenges they pose to translation.

Have you drawn the last panel, put down your pencil, and now you don’t know where to get started in translating your comic book? Here at Wabbit, our advanced translation software allows us to work alongside you on all phases of your project!

This article was written by one of our interns during their period of work experience; below is a brief bio:

Nicholas Foletti was born in the town of Cremona, near Milan, where he grew up surrounded by videogames, Pokémon cards and Harry Potter books. Having always been interested in foreign languages, he took a Bachelor’s Degree in Linguistic Mediation for Advertising and Marketing, followed by a Master’s in Translation at the “Civica” school for interpreters and translators in Milan, specialising in literary and non-fiction translation. A lover of cats, horror films and survival sandbox games, in his free time he struggles for survival in the game Don’t Starve.